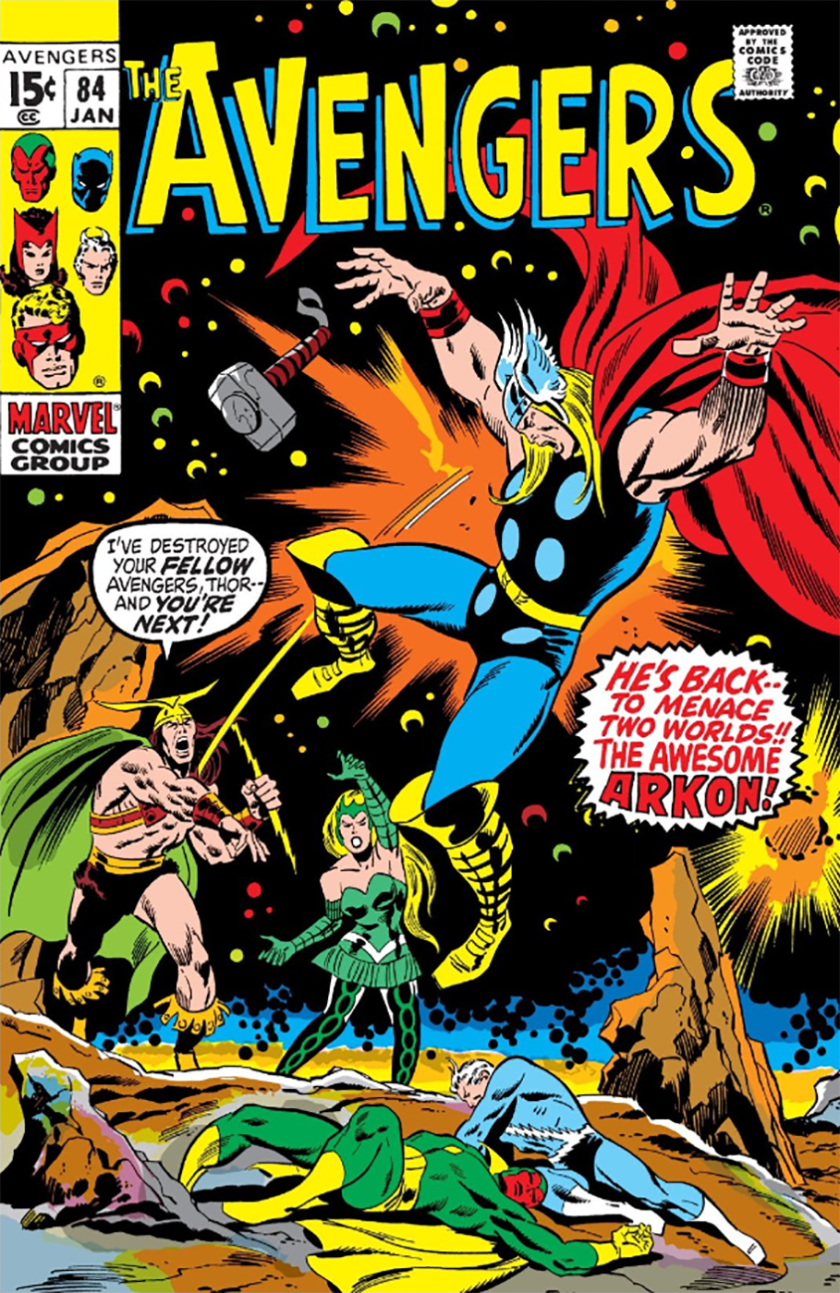 Racing through the air of an alien world, Black Knight urges his winged horse, Aragorn, onward ever faster.  With palpable urgency the pair make their way to a roiling cauldron in the ground known as the Well at the Center of Time. Black Knight is determined to hurl his enchanted sword, the Ebony Blade, into the Well and rid himself of its vile influence once and for all. But when the moment comes, he cannot bring himself to part with the malevolent weapon. No sooner does he abandon his attempt than he is attacked by a swarm of warriors native to this world. Black Knight makes a valiant stand but is eventually struck down by the leader of his attackers, Arkon the Magnificent.

As Black Knight plummets towards the ground, a vision of his fate intrudes upon the mind of the sleeping Scarlet Witch. Though safe in Avengers Mansion, she is startled awake by the dream. When her fellow Avengers rush in to see what is wrong, Scarlet Witch insists that something is wrong with Black Knight and the Avengers vow to look into the matter. Taking the obvious first step, Quicksilver and Black Panther place a call to Dane Whitman’s English manor, only to be told by his butler that Whitman is not home and that his current whereabouts are unknown. Believing that Arkon is involved with the disappearance of Black Knight, based on Scarlet Witch’s vision, the Avengers rush to summon Thor and his magical hammer, Mjolnir. With this, the heroes hope to open a portal into Arkon’s dimension and rescue their friend.

Back in Arkon’s throne room, Black Knight is brought before the warlord who, believing Black Knight a spy, demands to know the details of his mission. Black Knight insists that he is on a personal quest and refuses to speak of it further, only serving to further enrage his host. Enchantress offers to unlock the secret of his mission and kisses the Black Knight deeply. Now under her spell, Black Knight begins to tell the tale of how he came to Arkon’s dimension. After having stopped a pair of jewel thieves in an overzealous manner, Black Knight is forced to confront the fact that the Ebony Blade’s maligned influence over him is growing. Seeking guidance from his ancestor, Sir Percy, the hero is sent to Stonehenge on a quest to destroy the Ebony Blade and rid himself of its poison. Upon arriving Black Knight is greeted by a mysterious ancient figure who sends him to Arkon’s dimension in order to find the Well at the Center of Time. From there, Arkon knows the rest of the story. Arkon is unconvinced and decides that he must take the attack to the Avengers.

Just as Thor and Black Panther approach Avengers Mansion they are confronted by a wall of magical energy engulfing the mansion, causing it to vanish before their eyes. As the energy clears, Thor clearly sees the face of Enchantress and is warned to stay on Earth if he knows what is best for him. Meanwhile, within Avengers Mansion, the rest of the team find themselves roughly transported to Arkon’s world. This time, Arkon’s guards are waiting for them and although the Avengers spring into action, they are quickly subdued by the guards. Scarlet Witch is the last to fall, after being overpowered by Enchantress’ magic. Encased in Perma-Blast, the Avengers are brought before Arkon, Enchantress and a bewitched Black Knight. After Scarlet Witch once again spurns Arkon’s advances, the entire team is sent to the tower.

Luckily for the Avengers, Thor and Black Panther refused to heed Enchantress’ warning and arrive in the alternate dimension. While Thor engages with the guards, Black Panther secretly makes his way to the tower where the Avengers are being held. When he finds his teammates, they are in a magically induced dejected state. Only Black Panther’s regal commands manage to break through to Vision. Once Vision is free, his fellow Avengers find courage in his actions and soon free themselves as well. The Avengers join Thor in his assault on Arkon and his minions, though they are fighting an uphill battle. The tide finally turns when Scarlet Witch attempts to use her hex magic on Arkon, forcing Enchantress to concentrate even harder on Arkon and lose her grip on Black Knight. Freed from the spell, Black Knight confronts Arkon and in the resulting skirmish, the Ebony Blade disappears into the Well at the Center of Time. With Enchantress’ spell broken, Arkon ceases his fight with the Avengers, admits his error and is then forced to confront the resulting damage to his world as the Avengers return to their home. Deep within Avengers Mansion, Quicksilver and Vision watch as Black Panther and Captain America attempt to put the finishing touches on their D-Machine. With this device the Avengers hope to bridge the gap between their dimension and that of Arkon the Magnificent. There mission is one near and dear to their hearts; the rescue of Scarlet Witch. Impatient, Quicksilver chides his former teammates for taking their time know his sister’s life could be in danger. Vision however is quick to point out that there is far more at stake than just Scarlet Witch’s life and Quicksilver should not be so fixated on a single life when there are so many others in peril. In spite of Quicksilver’s earlier statements, Black Panther defends the speedster, noting that if Vision were human he might understand better what Pietro was going through.

Putting their banter put aside for a moment, Black Panther tells Cap to initiate the device. Unfortunately Panther’s fears are realized when the machine’s power supply proves unstable, causing him tremendous amounts of pain from the wild energy. Quicksilver attempts to intervene and rescue Black Panther but is rebuffed by force fields put in place to protect the device. With Black Panther barely holding on, Captain America acts quickly to free his friend, causing significant damage to the device in the process. With this latest setback, Quicksilver is unable to contain his frustration any more and releases it all on his former teammates. Tempers flare and Quicksilver storms out. Elsewhere in the mansion, Goliath works to create an oversized crossbow which matches his inhuman size, finding a way to possibly contribute since he is unable to travel dimensions with Black Panther. Has his experiment finds success, he is disturbed by an unexpected visitor, Black Widow. To his horror Widow announces that she will no longer be able to see Goliath. Stunned, Goliath demands that Widow tell him that she never loved him as proof of her intent. As tears well up in her eyes, she manages to force out the words as she walks away.

Elsewhere, a stranger creature journeys across an alien landscape. Riding on this beast of burden is the Scarlet Witch and her captor, Arkon the Magnificent. As they approach his city, Arkon chides Scarlet Witch for looking so glum. In his mind, the woman who will soon be his queen should be excited by the prospect, but Wanda has other ideas. She finds herself unable to have any pleasant feelings towards someone who would be willing to commit the mass murder of the people of Earth. As the pair arrive, they are greeted by Arkon’s elderly advisor who urges the conqueror to act quickly in order to save his world. Arkon inquires as to the status of the scientists building his nuclear device, but is told that they have not completed their work. Venturing to the dungeons, passing an imprisoned Toad on the way, Arkon attempts to persuade the scientists to his cause. When words fail, Arkon orders the most defiant of the men placed in a machine which will forcibly remove the knowledge they seek. With this knowledge, the advisor is able to create a handheld orb capable of accomplishing Arkon’s mission.

With his victory all but assured, Arkon takes the opportunity to win Scarlet Witch’s affections. Telling her the lie that he managed to find a way to save both planets, Arkon watches Scarlet Witch begin to soften. Taking things a step further, Arkon takes Wanda to see a special flower which is to be picked by the Imperion’s betrothed and worn on her wedding day. As Scarlet Witch picks the flower, she is reminded of a “Flower in the Crannied Wall” by Alfred, Lord Tennyson. Slowly the two are drawn to one another but just as they are about to kiss the moment is disturbed by a guard warning that a hole is space has opened and invaders sally forth through it. Immediately recognizing this as a counter-attack by the Avengers, Arkon summons his warriors for battle.

Even though the Avengers are vastly outnumbered, they manage to inflict devastating attacks on Arkon’s forces. Overwhelmed by the might of the assembled heroes, Arkon is forced back within his stronghold. Upon reaching his throne room, Arkon seizes upon the atom sphere which he intends to use to destroy the Earth. Scarlet Witch is appalled to learn she has been deceived, becoming even further incensed when Arkon claims to be above truth and falsehood. When the Avengers interrupt his escape, Arkon uses one of his lightning bolt javelins to transport back to Earth, arriving at the pinnacle of the Empire State Building. Thankfully the Avengers are right behind Arkon, thanks to the magic of Thor’s mighty hammer, Mjolnir. While Goliath scales the side of the build King Kong style, Quicksilver races to the top of the building. Although he is the first to arrive, Quicksilver is deflected by Arkon and knocked off the building, being saved at the last moment by Goliath. Repelling attacks from both Black Panther and Vision, Arkon attempts to deploy his world destroying weapon. Goliath is the only thing standing between the Earth and Armageddon and even his strength is being tested by the other-worldly visitor. Just as all seems lost, Arkon’s advisor appears in the sky telling the Imperion that there is no need for him to continue as Iron Man and Thor have created a device that is even now restoring the life giving rings around the planet. Seeing their quarrel at an end Arkon takes a moment free Scarlet Witch from her betrothal, if it is her will, before returning to his home. As the rest of the Avengers return home, Scarlet Witch finds herself once again staring at the Flower of Life, lost deep in her own thoughts.