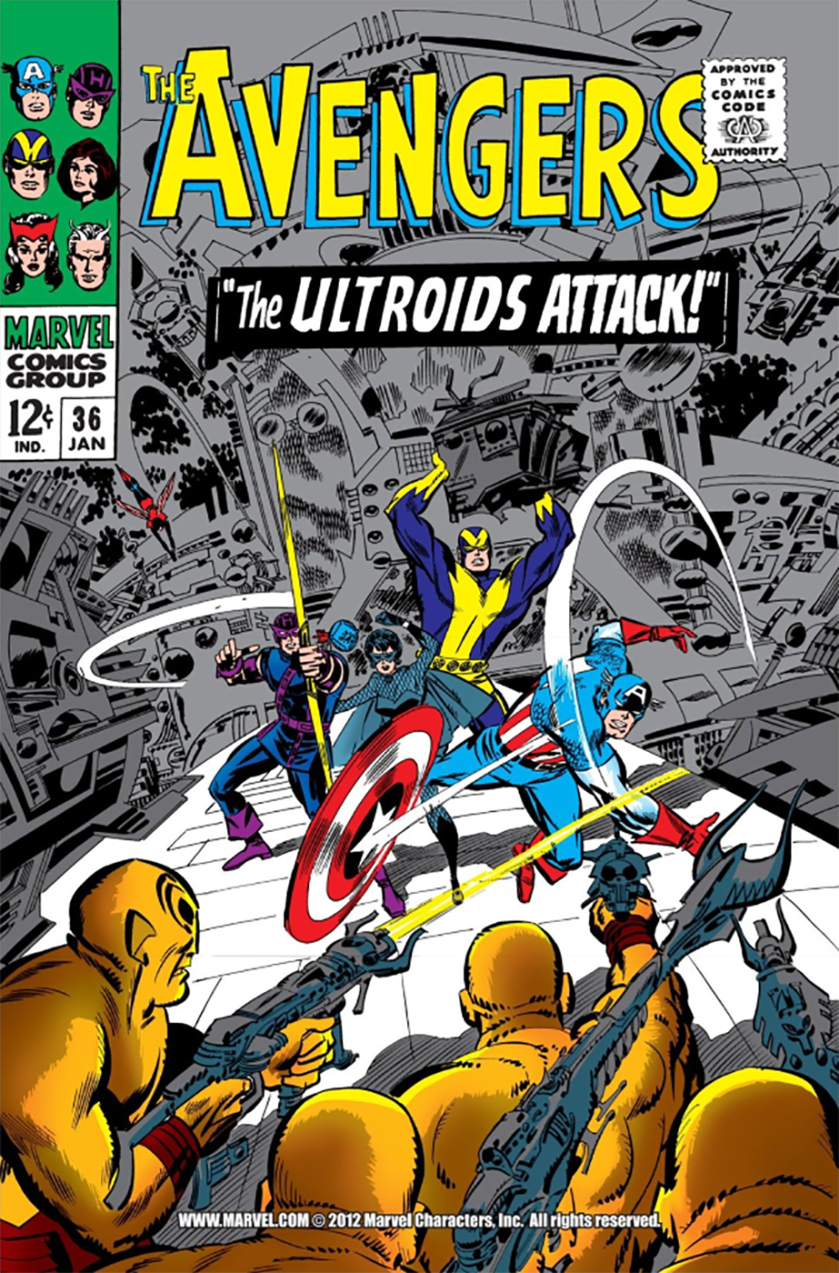 Upon his return to Avengers Mansion, Captain America is confronted by Scarlet Witch having returned from her Eastern European retreat. The lone Maximoff sibling then relates the story of what happened to her brother and her home town, stating that an unknown flying saucer landed in their town and that Quicksilver was taken captive while investigating. Unable to rescue her brother, Wanda then returned to recruit the aid of her teammates. As the Avengers assemble to determine their path forward, Hawkeye recommends offering membership to Black Widow. This suggestion is generally met with hostility and almost serves to split the team, if not for the protestations of Scarlet Witch. Returning to Scarlet Witch’s home town, the Avengers arrive and make their way into the saucer which has now moved underground, beneath the center of town. To the surprise of the entire team, they find both Quicksilver AND Scarlet Witch imprisoned. With her cover broken, the imposter Scarlet Witch reveals herself to be Ultrana, a creation of Ixar, the super computer that runs the saucer. The Avengers are then beset by Ixar’s Ultroids who intend to capture the Avengers in order to steal and absorb their powers, making them the most power army in the galaxy. One by one the Avengers are split up and captured until only Cap and Black Widow remain. As the pair attempt to free Scarlet Witch from her cylinder, they too fall before the unbelievable might of the Ultroids. Things were not looking good for Hawkeye and Captain America as the laser cage that held them slowly closed in on them, but thankfully Goliath showed up just in time to save the pair from a gruesome fate. Unfortunately, the trio are unable to locate Wasp, who was taken captive by the Living Laser. Meanwhile, the Living Laser met with the leaders of a South American revolutionary group. Agreeing to aid them in their cause, the Living Laser travels to Costa Verde in order to single-handedly overthrow the existing government. Though he is successful, his actions do not go unnoticed and the Avengers located their query and head off to rescue their teammate. As the Living Laser is ready and waiting for the Avengers, their first attack fails as they are driven off by the combined arms of several rebels. Though a second assault is slightly more successful, the Avengers are eventually captured and imprisoned by the Living Laser. Goliath decides it is worth the risk and again changes to his ant size in order to escape his bonds. Goliath then disables the Living Laser’s laser cannon, which explodes, disabling the villain. With the rest of the Avengers freed, the remaining rebels are rounded up and an elective government is established in Costa Verde.